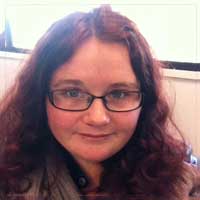 It may surprise you to learn that whenever we talk or type into a computer, computers need to translate that input into another language to process, store or respond to our message!

Computers have their own language which we call machine language for processing and storing information. This language is represented by combinations of only two digits (0 and 1).

Today programmers almost never write programs directly into this low level language because coding that way is a slow, error prone, and very difficult for humans to read.

Over time Computer Scientists have developed new 'higher level' languages that are much easier to read. These are artificial languages, that are created specifically to write instructions that can be translated into machine language (Binary) so that they can then be executed by a computer. Each language has its own vocabulary and structure. Older learners, 15 years and up, might be interested in learning more in the Programming Languages course.

When students learn to program, they are effectively engaged in language learning, and many of the skills and dispositions needed to learn a new language, such as the ability to recognise patterns, and the willingness to try, make mistakes, persist, and learn from others, are also valuable when programming.

In our Code Avengers junior courses we use a visual programming resource called Blockly, which is very similar to 'Scratch'. The blocks are a concrete visual representation and are able to show the links between elements within the code so that students can become familiar with coding concepts, rather than the structure and conventions of a particular language. Most child focused or introductory robotic devices such as Blue-bots, Spheros etc., use similar interfaces.

As students become more proficient programmers, they can move on to our Pro courses which will introduce them to text based programming languages such as HTML, CSS, Python and JavaScript. Our Programming 1 course for children aged 5-8 years is called Stormy Day. This series of ten lessons provides an introduction to the 'Blockly' programming environment. It encourages students to use and sequence a range of blocks and position characters in order to create a simple animated and interactive program. Students develop problem solving skills as they learn to locate mistakes in their code and correct them.

Alex and Lonnie, the two main characters in this story, prepare for their class trip to the beach, learn about food chains and looking after the beach environment, and create an animation telling their teacher the story of their adventure at the rock pools. Our Programming 2 course for students 7-11 years is called Gear up for Safety. Bikes and a bike track competition are the theme of these ten lessons. The course revisits skills learned in Programming 1. It also builds other Blockly programming skills such as loops and 'on-click' events. These allow the student to animate, add sound to a story, or position and move sprites. Students will also create interactive buttons and lists giving users the ability to indicate their choice.

Students join Alex, Lonnie and their friends, as they write programmes to build tracks and animate bikes. They will also build an interactive program to design helmets and a quiz to test bike safety knowledge. Our Programming 3 course, Larrson Castle Mystery, is written for students 10-13 years old. In this course students continue to consolidate their Blockly programming, problem solving and debugging skills as they create an interactive app retelling the story of Larsson Castle. Students learn to position objects and characters using grid coordinates, and create an animation using loops, conditionals, motion and timing blocks. Within the story they create an interactive game, using variables to keep score.

Students join Alex, Lonnie as they visit Larsson Castle with their family. What begins as a holiday in Finland becomes a search into the history of the castle and Lord Lucas, an ancestor who disappeared during a medieval siege.

Alongside these three interactive courses Code Avengers provide a number of offline activities and worksheets that teachers can use to consolidate students understanding of Programming. Don't forget to check out our lesson plans and other resources when you visit the teacher tab at https://www.codeavengers.com